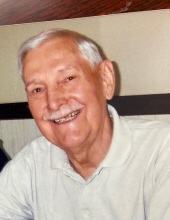 He was born May 16, 1928, in South Buffalo. Son of the late William and Agnes (Zuchowski) Larson.

Bill was a veteran of the US Marine Corps serving in World War II in the Aleutian Islands 1946-48 and three years in the Reserves at Camp Lejeune, North Carolina during the Korean War. Following service to his country, Bill attended Tri State University in Indiana earning his Bachelor of Arts degree in mechanical engineering. He was a proud alumni member of Phi Kappa Theta Fraternity, Indiana Alpha Gamma Chapter, nicknamed Spike. He was also a registered/licensed professional mechanical engineer in the states of New York and California.Bill provided for his family working as an engineer at several companies in Lockport, NY, New Haven, Conn., Olean, NY, Redondo Beach, Calif., Warren, Pa., including Alco Products in Dunkirk, N..Y, and Welch’s in Westfield, N.Y. He also worked as City of Dunkirk engineer under Mayor Leon Damian, and served one term as City of Dunkirk first ward councilman.

He enjoyed a long retirement, finishing his career at ITT (American) Standard in Cheektowaga NY.Bill kept busy reading, playing cards and chess, cooking, golfing, gardening, camping, fishing, biking, wine making, wood-working and building furniture, even building a canoe with son Daniel. He also kept in shape with regular exercise and weight training. Bill lived a life of service, teaching religious education, collecting for the March of Dimes, transporting and accompanying his brother-in-law to his VA appointments, calling bingo at St. Columban’s on the Lake, and most recently serving as president of the St. Columban’s Resident Council.

Relatives and friends are welcome to call Tuesday from 4 to 7 p.m., at the R. Mackowiak Funeral Home Inc., 56 East Doughty St., in Dunkirk.Funeral services will be held on Wednesday at 10 a.m., at Blessed Mary Angela Parish, St. Hyacinth’s Church.

Flowers are gratefully declined, and memorials can be made to St. Columban’s on the Lake, 2546 Lake Ave., Silver Creek, NY 14136.

To order memorial trees or send flowers to the family in memory of William Larson, please visit our flower store.