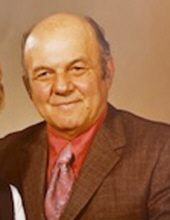 A retired firefighter of the city of Dunkirk, following his retirement from the city, he drove truck for Geiben Brothers in Dunkirk.

Bill enjoyed hunting, along with his Elk hunting trips to Colorado and fishing on his boat on Lakes Erie and Ontario.

Surviving is his son, William M. Reardon of Dunkirk; a sister-in-law, Frances Wdowiasz of Dunkirk; grandchildren: Jason W. (Mary Ellen) Reardon and Holley M. Reardon, both of Batavia; great-grandchildren: James W., Thomas J. and Sean Reardon. Also several nieces and nephews survive.Preceded in death in addition to his parents are his wife, Helen J. (Lanski) Reardon, who died May 25, 2016; and brothers: John, Robert and Donald Reardon.

Due to COVID-19 concerns, a memorial service will be held at a later date to be announced.

Arrangements are by the R. Mackowiak Funeral Home Inc

To order memorial trees or send flowers to the family in memory of William A. Reardon, please visit our flower store.