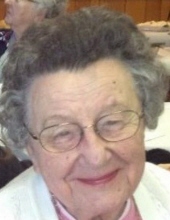 Born July 12, 1930, in Dunkirk, the daughter of the late Karol and Helen (Malkowski) Kucmierz.

Relatives and friends are welcome to call Thursday from 2-4 and 6-8 p.m., at the R. Mackowiak Funeral Home Inc., 56 E. Doughty St, Dunkirk. A Mass of Christian Burial will be celebrated Friday morning at 11:30 a.m. in Blessed Mary Angela Roman Catholic Parish Church of St. Hedwig. Interment will follow in St. Hedwig’s Cemetery.

To order memorial trees or send flowers to the family in memory of Wanda H. Graminski, please visit our flower store.