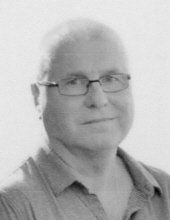 A former employee of ECR in Dunkirk and prior to that Plymouth Tube, Roblin Steel and Al Tech.

Surviving in addition to his father are his wife of over 20 years, Sharon (Krzyzanowicz) Kokocinski, of Dunkirk, whom he married November 4, 1995; their son, Robert Kokocinski Jr. of Dunkirk; daughters Nicole (Mark Beatty) Dobek, Samantha (Chris) Tofil; sister Carolyn (Gary) Kubasik, all of Dunkirk; his K-9 companion "Harley;" along with several nieces and nephews, especially nephews Michael and Jeffrey Kubasik, both of Dunkirk.

Relatives and friends are welcome to call Wednesday from 2-4 and 7-9 p.m. at the R. Mackowiak Funeral Home Inc., 56 East Doughty Street in Dunkirk. Funeral services will be held Thursday morning at 10 o'clock in Blessed Mary Angela Parish Church of St. Hedwig.

Private interment will be in St. Hedwig's Cemetery. Flowers are gratefully declined and memorials can be made to Cleveland Clinic Guest House, 9106 Euclid Ave., Cleveland, Ohio 44106.

To order memorial trees or send flowers to the family in memory of Robert M. Kokocinski, please visit our flower store.