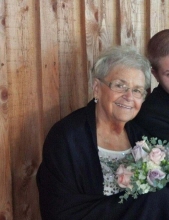 Patricia A. (Schell) Sweet “GG” passed away at her home on Wednesday evening January 16th surrounded by her loving family and cats.

She was 87 years old.Patricia was born on July 13, 1931 in Jamestown, NY; daughter of the late Clifford and Veda Schell. Patricia was raised in Fredonia and Graduated from Fredonia High School in 1949.

Patricia married the love of her life Herman on November 25, 1948 in Rising Fawn, GA. Together they lived in Dunkirk and raised two beautiful children. She worked in Fredonia Central Schools as a lunch lady and was also an Election Inspector for ChautauquaCounty. She enjoyed traveling with “Her Pal” to Poland, Hawaii, Alaska, Mexico, Ireland and Marco Island. The many Hunting adventures her and Herm took together landed her the biggest deer shot in New York State by a female in the late 70’s. Also during the 70’s they built a “Sweet Greenhouse” providing the Community, St. Columbians and Fredonia State with many Orchids, banana trees, amazing vegetables and unique flowers.

In Patricia’s free time she loved to do ceramics, was an avid reader, reading almost every book in the Dunkirk Library, Cross-word puzzles, sitting in her chair and keeping an eye on things in the Fourth Ward, Driving around the dock and most of all spending time with her children, Grandchildren and Great-Grandchildren.

Patricia’s Funeral Service will be held Monday, January 21st at 10 a.m. at the R. Mackowiak Funeral Home Inc.,56 East Doughty Street, Dunkirk. Calling hours will be held Sunday from 2-4 and 7-9. Burial will be in Willowbrook Cemetery.

Donations can be made to Chautauqua CountyHumane Society or The Dunkirk Library.

To order memorial trees or send flowers to the family in memory of Patricia A. Sweet, please visit our flower store.