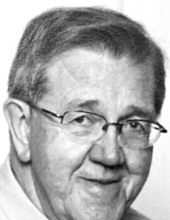 Lyndon F. Wise Lyndon F. Wise, age 79, of Dunkirk NY, passed away at Buffalo General Hospital on Sunday, December 11, 2016, following a brief battle with cancer. Members of his family were at his side. Lyn was born in Dunkirk, June 3, 1937, to the late Charles and Helen (Tadt) Wise. Lyn is survived by his devoted wife of 57 years, the former Josephine (Josie) Yacklon. They were marriedJuly 18,1959. Lyn was a lifelong resident of Dunkirk, who graduated from Dunkirk High School in 1955. He was then drafted into the Army, where he served as a typing teacher at Fort Dix,
NJ for two years. He worked at the former Dunkirk Ice Cream Plant/Fieldbrook Farms, for more than 43 years, before retiring in 2002. Lyn always appreciated life's simple pleasures, such as spending time with his family, being Papa Ferd to his grandchildren, bird watching, a little gardening, and moon gazing with his daughter Linda, who resides only two houses away. Both Lyn and wife Josie enjoyed the personal care provided by Linda. Lyn greatly enjoyed traveling to Cleveland to attend games with family and friends, and the tradition of attending each Indians home opener with his son John for the past 13 years. In addition to his wife,he is survived by son, John Lyndon (Paula) Wise of Fredonia; daughters, Suzanne Helen Wise and Linda Jo (Edwin) Griewisch, both of Dunkirk; brother, Edsel (Marilyn) Wise of Sheridan; granddaughter, Hailey (Tyler) Gajewski, of Pittsfield, MA; grandsons, Sean (Nicole) Wise of Boston, NY,Ryan Wise of Fredonia, and Theodore Lyndon of Dunkirk; great-grandson Joseph Ryan Wise of Boston, NY; step-greatgrandchildren, Zachary, Gavin and Gabriella Caito of Boston, NY; several nieces and nephews, and his beloved feline companion,BoBo. In addition to his parents,he was preceded in death by brothers Herbert (Ruth) Wise of Phoenix, AZ and Melvin (Beth) Wise of Kennedy,NY. Lyn was a member of the Conservation Club in Dunkirk, and was a founding member and Vice President of the NY Penn Wahoo Club, created for fellow localCleveland Indians fans. Lyn rooted for the Indians since childhood, and would take the train to
Cleveland to watch his team play. He later passed on his love for baseball and sports to his own family. Lyn was also a loyal Cleveland Browns, Cleveland Cavaliers, and Dunkirk Marauders fan. His "claim to fame" was being the former paperboy for Van Miller, before Van became a famous sports announcer. Lyn also enjoyed bowling, and served as a men's league secretary at Lucky Lanes for many years. He was a member of the Dunkirk First United Methodist Church, serving various roles, with his favorite being Head Usher. Relatives and friends are welcome to call today from 4-7 p.m. at the R. Mackowiak Funeral Home Inc., 56 East Doughty Street in Dunkirk. Funeral services will be conducted Wednesday morning at 11 a.m. at the funeralhome. Flowers are gratefully declined. Memorials in Lyndonás name to The Lakeshore Humane Society in Dunkirk, Northern Chautauqua Canine Rescue in Westfield, or the Dunkirk First United Methodist Church are greatly appreciated. Cards can be sent to the family at 758 Park Avenue, Dunkirk,NY, 14048

To order memorial trees or send flowers to the family in memory of Lyndon F. Wise, please visit our flower store.