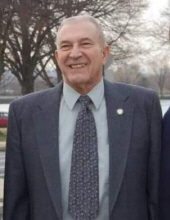 Leon Price slipped behind the garden wall on Jan. 11, 2021, after suffering from a fall.

He graduated from Dunkirk High School in 1955 and entered active duty in the United States Navy, serving in the Pacific zone for two years. Leon received his degree from Fredonia State Teachers College in May, 1961. He accepted a position teaching 6th grade teaching in the Norwalk-LaMirada City School District in Norwalk, C.A., and attended UCLA and L.A. State College part time.

During summers, he attended the University of Oregon and received his Master’s Degree in August 1964. While enrolled in doctoral studies at the University of Wyoming in Laramie, Leon taught reading in the Albany County School District until 1969, when he accepted a position in the Dunkirk City School District as Principal of School #3. In 1975, he transferred to School #7, which he, his brothers and sister, his four daughters, and two granddaughters also attended. He served there until his retirement in 1995, after suffering a major heart attack.

Following a family tradition, Lee served in the United States Naval Reserve for 37 years. He cruised every year and attended drills on a regular basis. He loved ships and for many years could identify the type of ship and call letters.

Leon met his wife, the former Frances J. Koch, in the college library in September 1957, and they married in Aug. 1961, living in California, Oregon, and Wyoming before returning to New York State, where they resided for the past 51 years.

He was a member of the SERTOMA Club of Laramie, and the First Ward Falcons Club in Dunkirk, as well as the School Administers Assoc. of NYS, and the Dunkirk Principal’s Association.

A funeral, including a flag ceremony using a flag flown in his honor on the U.S.S. Ronald Reagan, was held on Saturday, January 17, followed by interment in St. Joseph’s cemetery, Fredonia, where he will lie beside his sister and parents. At his previous request, his daughter Laura played her bagpipes as a tribute to him at the funeral home and gravesite. Pallbearers were U.S. Army Colonel (RET) Thomas Meyer, Benjamin and Lucas Meyer, John Mahaney, Donald Panzo, Rich Cellino, John Hollins, and Carl Lis.

Arrangements are by the R. Mackowiak Funeral Home Inc., Dunkirk.

To order memorial trees or send flowers to the family in memory of Leon D. Price, please visit our flower store.