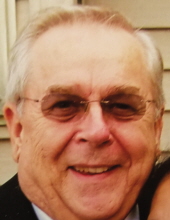 He was born November15, 1936, in Franklin, Pennsylvania, son of the late Joseph and Hazel (Simon) Boner.

A veteran of the US Air Force from 1956-60, and he also received the Good Conduct Medal.

Following his honorable discharge from the Air Force, Ken worked at Miller Brewing in Texas and then moved his family to Dunkirk and worked at and retired from the Carriage House in Fredonia.

Ken enjoyed traveling with his wife.

Relatives and friends are welcome to a Memorial service to be held Monday morning at 10 AM in St. Elizabeth Ann Seton R.C.Church.

To order memorial trees or send flowers to the family in memory of Kenneth E. Boner, please visit our flower store.