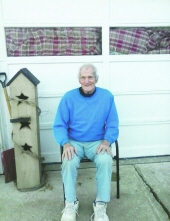 He was born in Dunkirk February 26, 1936, son of the late Michael and Mary (Moraniec) Guziec.

A longtime resident of Dunkirk, NY, Joe graduated from Cardinal Mindzenty High School in 1954. He subsequently enlisted in the United States Navy and served until he was honorably discharged.

In November 1963 he married his late wife, Bernice (Raczek) Guziec to whom he was devoted and faithful. A majority of his career was spent working at Special Metals Corporation where he retired after 32 years, but his favorite job was at his hot dog stand.

Joe loved his family and friends and is easily remembered as an animated, gregarious and generous guy, who was always the instigator of a good time. An avid hunter, outdoorsman and lover of dogs, he also enjoyed Johnny Cash, patriotic music, and the Sunday Morning Polka Hour. An enthusiastic professional sports fan, the New York Yankees, the Buffalo Sabres and of course, the Buffalo Bills were by far and away his favorite teams.

Joe was a member of St. Hedwig’s R.C. Church, a member of the AFL-CIO United Steelworkers, a former member of the Moniuszko Polish Home, a lifetime member of the First Ward Falcon Club, a long-time regular at Jenna’s Fourth Street Cafe, and a ready and able volunteer whenever friends and family called and his health permitted.

In lieu of flowers donations can be made in his remembrance to the Navy-Marine Corps Relief Society (nmcrs.org), the Alzheimer’s Association (alz.org), or the Lakeshore Humane Society (lakshorehumanesociety.org).

A Memorial mass will be held Friday morning at 10 AM in Blessed Mary Angela R.C. Parish Church of St. Hedwig. Burial will be in St. Hedwig’s Cemetery.

To order memorial trees or send flowers to the family in memory of Joseph Guziec, please visit our flower store.