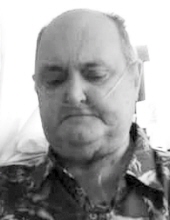 Jack worked as an auto detailer for Mrs. Clean, a business his wife owned and operated, prior to that he was employed by Dunkirk Radiator. In the years before he got sick, he enjoyed going to car cruises, collecting cannons and airplanes. He was a Buffalo Bills fan and would cheer on his team every chance he got. He loved the outdoors, going fishing and riding motorcycles with his wife. He especially loved spending time with his grandchildren whenever possible.

Jack was loved by all the nurses and aides at the Chautauqua County Home during his many years there.Relatives and friends are welcome to call Tuesday from 14 p.m. at the R. Mackowiak Funeral Home Inc., 56 East Doughty St., Dunkirk, where a prayer service will be held at 4 p.m.

In lieu of flowers, memorial donations may be given in the name Jack Farrington to the Gage Community Chapel, 475 King Road, Forestville, NY 14062.

To order memorial trees or send flowers to the family in memory of John W. Farrington, please visit our flower store.