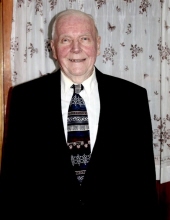 John Joseph Ceranowicz, 96, of Dunkirk, passed away Saturday, June 18, 2022, at home, following a brief illness, with his family at his side.

He retired from Great Lakes Color Printing in Dunkirk

John enjoyed to travel and boasted that he visited almost all 50 states of the United States, traveled to Brazil, Paraguay and Argentina, he also liked to ride his Harley Davidson, hunting and play Pinochle.

Relatives and friends may call Today from 3-5 p.m., at the R. Mackowiak Funeral Home Inc., 56 East Doughty St., where funeral services will be held at 4:30 p.m., and military services at 5 p.m. Private burial will be in St. Hyacinth’s Cemetery.

To order memorial trees or send flowers to the family in memory of John Joseph Ceranowicz, please visit our flower store.