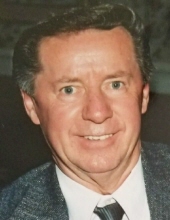 John was born in Dunkirk on May 28, 1935. He was the youngest of seven born to George and Katherine (Gomiela) Woloszyn.John served in the US Army from September 1955 to August 1957. Following his services to his country, John came home to Dunkirk. John was a lifelong resident of Dunkirk and served as the City’s Fourth Ward Councilman for many years. He worked at the former Al Tech Steel where he retired after over 33 years.John’s many community memberships over the years included being a member of Blessed Mary Angela RC Parish and lifelong member of St. Hedwig’s RC Church, member of the the Holy Name Society and, was a dedicated bingo volunteer and alter server for the parish for many years, Kosciuszko Polish Home, First Ward Falcon Club, Fourth Ward Falcon Club, Dom Polski, Polish National Alliance, Dunkirk Veterans of World War, volunteer fireman for Hose IV, Dunkirk Exempt Firemen’s Association, Knights of Columbus where he was a past officer, Historical Society of Dunkirk, Dunkirk Historical Lighthouse and Veterans Park Museum.

John enjoyed golfing and loved to watch all sports but his favorites to follow were the Buffalo Bills, Notre Dame College football and the Yankees.

John is survived by his daughters Katherine Tilley (Steven) of Dunkirk and Sharon Hall (Glenn) of Huntsville, AL. He is also survived by a granddaughter Kayla Hall from Huntsville, along with several nieces and nephews and cousins.Preceded in death in addition to his parents are brothers, Michael, Joseph, Edward, Chester Woloszyn, sisters Stella Cieslewicz, Genevieve Krzakala, grand-daughter Genavieve Hall, and wife Nancy Woloszyn.

Relatives and friends are welcome to call at the R. Mackowiak Funeral Home Inc., 56 East Doughty Street in Dunkirk on Monday from 5-8 p.m. A Mass of Christian Burial will be celebrated on Tuesday morning at 10 o’clock in Blessed Mary Angela RC Parish Church of St. Hedwig.Internment will be in St. Hedwig’s Cemetery.

Members of Murray Hose Co. IC are to assemble at the funeral home Monday evening at 7.

In lieu of flowers, donations are requested to Wounded Warrior Project (support.woundedwarriorproject.org).

To order memorial trees or send flowers to the family in memory of John A. Woloszyn, please visit our flower store.