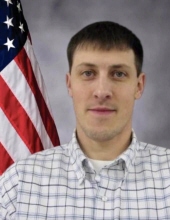 Jeffrey S. Ganey "Hoopy", 44, of Dunkirk ended a courageous battle with a congenital heart defect early Monday morning (June 27, 2022) at the Cleveland Clinic with his girlfriend Jeanette at his side.

He was born in Dunkirk on September 22, 1977, son of Thomas Ganey and Marie (Kulpa) Ganey.

A graduate of Dunkirk High School, Class of 1996, Jeff was a life member of the East Dunkirk Fire Department, having 26 years of service there. He served as chief of the department in 2009. Jeff joined the City of Dunkirk in 2004, and worked for 18 years as a 911 Dispatcher. He truly enjoyed his job and had much respect for the officers he worked with. Jeff continued
to dispatch until he was no longer able to do so because of his health.

Jeff enjoyed everything Disney, and was planning a trip there again with his girlfriend and kids. He looked forward to watching baseball and college football games, especially if it was the Oakland A's and the Alabama Crimson Tide.

He truly enjoyed cooking and was always up to searching for and trying out new recipes. Jeff enjoyed spending time with his family, whether it was sitting out back by the pool or relaxing by a fire at Camp Firewood (The Farm). What made Jeff the happiest of all was spending time with his son, Jonathan. He was honored to be able to coach his son through many years of little league and travel baseball. To continue his involvement with baseball while his son was playing, Jeff served as the
Major League Coordinator and Vice President of the Dunkirk Little League for 6 years.

Besides his parents, Jeff is survived by his son Jonathan (mother Mollie McCown), girlfriend Jeanette Katta, and her children Robert and Gracey. He is also survived by three brothers, Peter (Linda) Ganey, James (Jamie) Ganey, and Michael (Janice) Ganey; two sisters, Lynne (Mike) McQuiggan and Lori Morrison (Don Rebic). Many special aunts, uncles, nieces, nephews, and cousins also survive. Jeff shared a special bond with each of his nieces and nephews and was so proud of everything they have accomplished. Jeff also leaves behind his new pup Najee, who he found comfort and joy in being with the past few months.

Relatives and friends are welcome to call Friday from, 3-6 PM at the R. Mackowiak Funeral Home Inc., 56 East Doughty St., where a special prayer service will be held following at 6PM.

In lieu of flowers, the family has asked for donations to be made in Jeff's name to the Dunkirk Little League in care of Gary Haase, 229 Nevins St., Dunkirk.

To order memorial trees or send flowers to the family in memory of Jeffrey S Ganey, please visit our flower store.