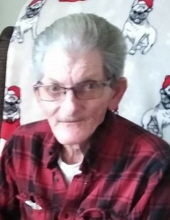 James R Scott’s life journey took him home to be with the Lord on Tuesday, March 31, 2020.

James was born on December 12, 1950 to Leonard Ray Scott and Minnie Hubbard-Scott in Lubbock Texas. He relocated to New York State and eventually made his home in Brocton in the late 1980s with his wife, Nancy Stevens-Scott, whom he married in 1983. He was a hard working man who instilled a strong work ethic in each of his children. James and Nancy successfully blended their families and James was very proud of all of his children.

He was blessed to be grandfather to more than 20 grandchildren and many of them provided him with great-grandchildren. James was a skilled carpenter with a deep love for building and creating. He helped each of his children learn home repairs and was always ready to lend a hand to someone in need. He came to know God later in life and his daily prayers and scripture reading were an inspiration to his family.

James’ life was profoundly affected by the movie “The Passion of Christ” and he spent many hours studying and researching the film and the biblical story behind it.

A Celebration of Life service will be held this summer at a date yet to be determined.

To order memorial trees or send flowers to the family in memory of James R. Scott, please visit our flower store.