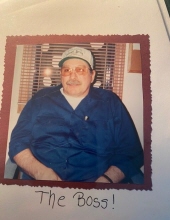 David R. Price, 78, of Dunkirk, passed away Thursday, April 21, 2022 following a brief illness at Brooks Memorial Hospital with his loving family at his side.

He attended school in the Dunkirk School District and graduated with the class of 1962.

After graduating he served in the U.S. Navy from 1962-64 aboard the USS Bushnell in Key West, Fla.

He retired from Ralston Purina after 27 years where he was employed as a supervisor.

David was a member of several social clubs in Dunkirk including: the Dom Polski Club, the Kosciusko-Club, the Moniuszko Club, the Conservation Club, and the Exempt Firemen’s Club, and had been a long time member of the Daniel Anson Hose Company 3. He also served on the board of directors at the FirstWard Falcons Club.

After retiring, David mostly enjoyed spending time with his family, friends and his dogs. He enjoyed vegetable gardening. He was an avid Buffalo Bills fan. He also enjoyed watching westerns and war movies.

He is survived by his wife of 39 years, Rebecca (Steen) Price, whom he married Sept. 25, 1982. Siblings: Diane (John) Romanik of Dunkirk, Daniel Price of Great Mills, Md., and Donald (Deborah) Price of Lexington,N.C. His children: David (Kathleen) Price, Joseph (Tiziana) Price, William (Charlotte) Price, all of Fredonia, and Deborah Miga of Gowanda, whom he shares with their mother, Barbara Biondo. His stepchildren: Terry M. Lewis of Dunkirk, Melissa (Chris Graves) Webb, of Little Genesee N.Y., and Amy Lynn Nixon of Fredonia. Nine grandchildren; his loving dog, Susie May; and several nieces, nephews, and cousins, as well as many childhood and community friends he considered family.

David was predeceased in addition to his parents by his sister, Dorothy (James) Arnold; his granddaughter, Stefanie Price; and son-in- law, Steven Miga.

To order memorial trees or send flowers to the family in memory of David R. Price, please visit our flower store.