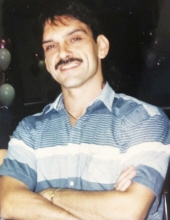 He was born in Dunkirk, January 25, 1962, son of the late Daniel and Janet (McQuiggan) Christopher II.

Daren attended Dunkirk High School.A past employee of Best Western in Dunkirk and worked as a handyman and carpenter and worked various jobs locally.

Daren was a past member at several local clubs to include Dom Polski Club, Moniuszko Club, Kosciuszko Club.A practical joker, and lover of comedy, he liked to play pranks on friends and family along with making up funny phrases.Daren had a love for music and was oftentimes singing along to his records or the radio. A free spirit, he blazed his own trail through life.

Relatives and friends are welcome to call on Saturday Dec 28th from 11AM to 2 PM at the R. Mackowiak Funeral Home Inc., 56 E Doughty St, where Christian burial services will be held at 1 pm. Private internment will be at the convenience of the family.

To order memorial trees or send flowers to the family in memory of Daren A. Christopher, please visit our flower store.