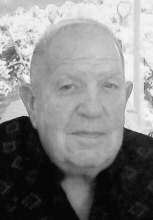 Daniel J. "Baldy" Wincenciak, 85, of Dunkirk, died, Saturday morning, January 2, 2106, at the home of his daughter in Portland. He was born July 23, 1930, in Dunkirk, son of the late Anthony and Mary (Kubera) Wincenciak. A veteran of the US Air Force as SSGT, and received the National Defense Service Medal and Good Conduct Medal. While in the service, "Baldy" was a draftsman, and for a long time following his service to his country, "Baldy" enjoyed to make Signs for many people and business', some of which are still in use today. A retired employee of the City of Dunkirk, "Baldy" drove City bus, where he made many friends with people and the young children that rode his bus. Also, he worked at True Temper until its closing and prior to that he operated his own barbershop. His memberships include Blessed Mary Angela Parish Church of St. Hedwig, Life member Murray Hose Company #4, Life member The Fourth Ward Falcon Club. "Baldy" loved his animals, to feed the birds, and his K9 companions Annie and Lori. Surviving are his daughters Lynette (Robert) Dix, of Portland, Linda (Everett) Enos, of Russell, PA., his cousin Anabelle (Don) Reilly of Dunkirk, 5 grandchildren Holly Spoon, Laralyn Whitesell, Joshua (Gabe Hrysenko) Eppinger, Daniel Lambe, Tracey Schulenberg, great grandchildren, nieces and nephews also survive. Preceded in death in addition to his parents is his wife of 54 years Helen S. (Schilling) Wincenciak, whom he married June 28, 1958 and died July 23, 2012, son Tab Wincenciak who died October 15, 1994, his sister Florence Pieszak, brothers Anthony "Andy" and John Wincenciak. Relatives and friends are welcome to call at the R. Mackowiak Funeral Home Inc., 56 East Doughty Street in Dunkirk, on Monday from 2-4 and 7-9 PM. A mass of Christian burial will be celebrated Tuesday morning at 10 o'clock in Blessed Mary Angela Parish Church of St. Hedwig. Interment will be in St. Hedwig's Cemetery. Memorials can be made to HOSPICE of Chautauqua County, 20 W. Fairmount Ave., Lakewood, NY 14750 of the Lake Shore Humane Society, 431 East Chestnut Street, Dunkirk, NY 14048.

To order memorial trees or send flowers to the family in memory of Daniel J. "Baldy" Wincenciak, please visit our flower store.