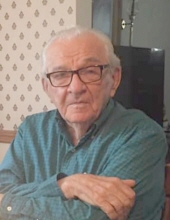 Daniel Stephen Buczek, professor of history emeritus at Fairfield University in Fairfield, Connecticut died peacefully on January 12, 2020.Professor Buczek, the son of Polish immigrant parents, Jan and Marianna (Kubicki) Buczek, was born in Dunkirk, New York on September 9, 1923 and grew to manhood in the Fourth Ward in Dunkirk. He attended both St. Hedwig’s Parochial School and Public School #6 and graduated from Dunkirk High School, class of 1941. He then matriculated to Canisius College, Buffalo, NY for two years before be-ing drafted into military service during World War II.

Because of his facility with the Polish language, he was chosen to be trained in Russian, a kindred language, at Oklahoma A&M university in Stillwater, Oklahoma.After nine months of intensive training, he was assigned as a Polish-Russian Interpreter with the Military Police Prisoner of War Processing Company. His duty was to prepare the prisoners of war to return to civilian life once hostilities ended.After the Battle of the Bulge in late 1944, he was transferred to an infantry regiment of the Eighth Division. This division literally walked across Germany to await the meeting with the advancing Russian forces near the city of Schwerin.Prof. Buczek was again assigned as a Polish-Russian interpreter for the regimental commander of his regiment. In conversations with the Russian commanders, he helped formulate agreements about temporary boundary lines between Allied and Russian Forces. He then spent the first four months of 1945 preparing displaced persons for return to civilian life.

He was discharged in December 1945 and in September 1946 re-enrolled at Canisius College from which he graduated in the class of 1948 with the degree of Bachelor of Arts in History and the Classics. His post-graduate education was pursued at Fordham University, the Bronx, New York City from which he completed studies for the degree of Doctor of Philosophy in Medieval History in 1958. Prof. Buczek began a forty-year teaching and writing career in 1950 at Seton Hall University,South Orange, NJ then in 1955 transferred to Fairfield University, Fairfield, Connecticut (a sister institution to Canisius College) for the next thirty-five years. During his academic career, Prof. Buczek served as Kosciuszko Foundation Research Professor of History at Warsaw (Poland) University from 1970-71, then as Visiting Professor of History at St. John’s University, Queens, New York City from 1973-74.After retirement from active teaching in 1990, Prof. Buczek became interested in the history of the Polish immigration to the United States for the purpose of overcoming the stereotype of the “dumb Polack.” He had published three books and a dozen articles on the subject in professional historical journals.After the death of his wife Raffaela (Fiocco) in 2010, he returned to his boyhood surroundings in the Dunkirk-Fredonia area, after an absence of fifty-five years, as a resident of Fredonia Place.

Prof. Buczek was preceded in death by his wife, Raffaela, originally of the Bronx, New York, by his parents, by his brothers Stanley and Leo Buczek, by his brother-in-law Sebastian (Bud) Manzella and his nephew David Manzella. He leaves this life having nurtured to manhood a son, John Charles of Fairfield, Connecticut and a daughter, Catherine Ann Ryan of Cheshire, Connecticut. Four grandchildren also survive: Lauren and Sarah Buczek of Fairfield, CT and Kevin and Kelley Ryan of Cheshire, CT. He is also survived by his sister, Ann Manzella of Dunkirk and five nieces: Barbara Strychalski of Jamestown, NY, Nancy Jagoda and Marianne Furlan of Fredonia, Melinda Rotondo of Swampscott, MA and Mary Louise Van Scoter of Montville, Maine.

Professor Dan will be remembered by family, colleagues, students and friends as a fair, thorough and demanding taskmaster. He was guided in his teaching career by advice given to him by a Canisius College professor to, “Share all you know without reservation with whoever is willing to listen.” In life he was guided by the Christian slogan, “Forgive and forget.”

A memorial mass of Christian of Christian burial will be celebrated Friday morning at 10 AM in Blessed Mary R.C. Parish Church of St. Hedwig.

To order memorial trees or send flowers to the family in memory of Daniel C. Buczek, please visit our flower store.