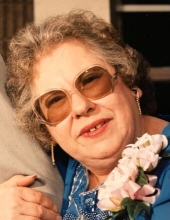 Stella (Wawrowski) Karalus, 86, passed away peacefully, surrounded by her loving family, on June 2nd, 2022, at St. Vincent’s Hospital in Erie, Pa., after a brief illness.

Born in Buffalo, N.Y., on March 25, 1936, Stella was the daughter of the late Alexander and Viola (nee Mogilny) Wawrowski.

Stella was a long time employee of Hills Department Store. Prior to Hills, she worked at various other local retail stores, such as, Loblaws, Gammon’s, Fedyszyn’s and Present Company.

She enjoyed playing bingo, cooking, baking, gardening, fishing, and an occasional scratch off lottery ticket. But, most of all, Stella enjoyed spending time with family and reminiscing of days gone by.

She was the life of the party at family gatherings and loved the holidays and celebrating polish traditions. Stella was also a proud member of the Bills Mafia and an avid Buffalo Sabres fan. She was a long time member of St Hyacinth/Blessed Mary Angela Parish.

A Mass of Christian Burial will be celebrated on Wednesday morning at 10 a.m. in Blessed Mary Angela Roman Catholic Parish Church of St. Hyacinth. Interment will be in St. Hyacinth’s Cemetery. There will be no prior visitation and flowers are gratefully declined.

To order memorial trees or send flowers to the family in memory of Stella M Karalus, please visit our flower store.