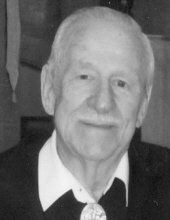 A veteran of the National Guard, Ralph was a past employee of the former Al Tech Steel in Dunkirk. An avid fan of NASCAR and the Late #3 Dale Earnhardt, Ralph also enjoyed riding his Harley Davidson motorcycle and going skeet shooting, but most of all he loved time spent with his grandchildren.

His past memberships include the Moose Club, Beaver Club and First Ward Falcon Club.

Preceding him in death, in addition to his parents, are sisters Ruth Nunn and Delores Graves.

A Memorial Service will be held Saturday, June 25 at 11 a.m. in the First United Methodist Church in Fredonia. Arrangements are by the R. Mackowiak Funeral Home Inc., 56 East Doughty Street in Dunkirk.

To order memorial trees or send flowers to the family in memory of Ralph H. Anderson, please visit our flower store.